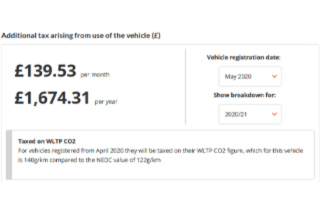 New cars have been tested under WLTP since the 1st September 2017 but the manufacturers have been showing the NEDC equivalent CO2 figures. Only recently have the WLTP figures begun to emerge and this may be too late for cars already ordered and to be delivered after 5th April 2020. Company car drivers could be in for a shock if company car tax turns out to be several bands higher than expected.

The Comcar company car tax calculator now incorporates a registration month dropdown so users can see the impact of the forthcoming WLTP changes. If the car is registered after the 5th April the WLTP CO2 figure will be used for all tax calculations (the NEDC figure won't be available anyway) and a new set of tax percentages will apply that provide a 2% discount in 2020/21 and 1% discount in 2021/22 for low and medium emission cars. Cars registered in February or March will keep NEDC CO2 figures for their lifetime and will not be eligible for the 2% and 1% reductions.

When making comparisons, you will need to switch the month of registration whilst keeping the tax years the same in order to see the impact. Only the bottom section of the income tax calculator will adjust for WLTP. The tax amounts at the top of the page and elsewhere on the site will remain based on NEDC until the site switches to WLTP at the beginning of April.

We are expecting the WLTP percentage reductions to be confirmed by the 11th March Budget and a subsequent Finance Act, and nothing from HMRC, HM Treasury or Department of Transport has thrown doubt on this. Nevertheless all tax rates are subject to change.

WLTP figures come directly from the Manufacturers,  WLTP versus NEDC CO2 and we hope to fill in the gaps from Nissan and FCA soon. In general we aim to show the base figures now, and be ready to show the impact of options by April. It is still early days for the OEMs but the WLTP CO2 figure on the last Certificate of Conformity we saw was 4 grams higher than the latest published WLTP list by the manufacturer.

Many of the popular PHEVs such as the BMW 3 Series Saloon 330e M-Sport Sport Auto have lower CO2 figures under the WLTP test but small changes within the sub 51 g/km won't make any difference either way. What these vehicles do benefit from is the 2% then 1% appropriate tax discount. So a driver will pay 20% less tax next year (10% not 12% percentage charge) if the car is registered just after 5th April 2020 instead of just before.

Some single-fuel vehicles show lower CO2 figures under WLTP, but these are rare. You are more likely to find cases where the impact of the WLTP CO2 increase is outweighed by the benefit of the tax discount or the remains within the tax band such as the Suzuki Swift 1.2 Dualjet Hybrid SZ-T .

Most models currently on fleets will lose out as WLTP testing results in substantially increased CO2 figures. Have a look at the model lists on WLTP-co2-figures/. The WLTP tax discounts are not generous enough, so if you must replace a moderate diesel that is jumping from 109 g/km to 146 g/km try and get it delivered before 6th April. That could save you £80 per month if you are a 40% taxpayer.

The arrival of WLTP figures in the tax system will hasten demands from company car drivers to adopt electric cars or PHEVs, and many choosers seem happy to contribute towards the higher leasing costs if they can drive interesting cars with minimal tax.

The car industry has been poor at communicating the WLTP test figures, and left company car choosers in the dark. The car sellers have been covered by The Passenger Car (Fuel Consumption and CO2 Emissions Information) Regulations which seeks to avoid confusing buyers with WLTP CO2 figures before 6th April 2020, but that legislation is aimed at showroom cars, and is poorly suited for vehicles on a  long delivery cycle.

Do try and avoid taking delivery of a car registered on the 1st to 5th April. For company tax and VED purposes the WLTP CO2 figure will apply whereas, for personal tax including company car tax, the NEDC CO2 figure will apply !. In this period it might be difficult or impossible to find the NEDC figure, especially if it is not shown on the V5 or VCA database.